DENVER – Only about 8% of the homeowners who lost their homes in the Marshall Fire in December had full replacement insurance coverage, and the other homes were underinsured by hundreds of thousands of dollars, according to a preliminary audit done by the Colorado Division of Insurance.

The analysis done by the DOI was based off claims provided by 61 insurance companies and 951 of the 1,084 homes that were deemed total losses in the fire and straight-line wind event.

Thus far, for the 951 homes, there have been about $1.02 billion in claims incurred. Among the 951 homes, only 76 had guaranteed replacement coverage, or about 8%. That type of coverage covers the full replacement of a home with a similar footprint and quality as the prior home without a cap.

MORE: ‘There should have been a failsafe’: Marshall Fire victims say they are massively underinsured

But the rest of the 92% of homeowners were underinsured, according to the analysis, which looked at underinsurance estimates based off rebuilding costs of $250, $300, and $350 per square foot.

Last week, the U.S. Small Business Administration announced it had doubled the local multiplier used to determine how much people might receive who applied for disaster loan assistance to try to cover any gaps left by underinsurance.

Typically, quotes are based off the national average of between $100-$200 per square foot, while local estimates in Louisville, Superior and Boulder County are closer to $295-$335 per square foot.

But the maximum loan amounts did not change and will be capped at $200,000 for rebuilding and $40,000 for personal effects. Both of those loan thresholds have not been changed since they were set in 1994.

MORE: Homeowners insurance and what you need to know to be sure you’re not underinsured

Of the 951 policies that were analyzed, the number of underinsured homeowners breaks down as follows:

Out of the 951 policies, the average amount of underinsurance based off rebuilding estimates are:

The DOI also extrapolated out the data beyond the 951 policies it analyzed to try to estimate an underinsurance figure for all 1,084 homes lost. The total estimates are as follows:

Colorado Insurance Commissioner Michael Conway said the preliminary analysis was needed to figure out the scope of the underinsurance problem so the DOI can work on solutions for the widespread issue.

“This is our initial analysis, but we will continue to analyze the claims data as it comes in from the insurance companies,” Conway said. “However, the challenge now and going forward will be nailing down reliable rebuilding costs.”

The initial data collected from the insurance companies was for 983 claims, but that was whittled down to the 951 for analysis because 32 claims were incomplete or had non-traditional policies, according to the DOI.

The Division of Insurance said it conducted the analysis to try to better figure out the scope of underinsurance, and that the data will get better as insurance companies continue to report each month.

By the end of last month, the SBA had approved $91 million in disaster loans for people whose homes were total losses in the Marshall Fire, most of which the DOI believes will be used to cover gaps between what insurance covers and the cost of rebuilding.

The DOI plans to hold a town hall to discuss the underinsurance issues and other next steps in the process the week of May 16, the division said. Further information will be posted on the DOI’s Marshall Fire response website.

The long-awaited debris private property debris removal program run by the county got underway last week — the first step in the rebuilding process for many of the people who lost their homes in the wildfire.

Thu Apr 28 , 2022
Republic file photo Cummins employees walk to the newly remodeled workspace in the Cummins Corporate Office building in Columbus, Ind., pictured Tuesday, July 23, 2019. Cummins Inc. has taken a step forward in what analysts say indicates the company plans to separate its filtration business into a standalone company. The […] 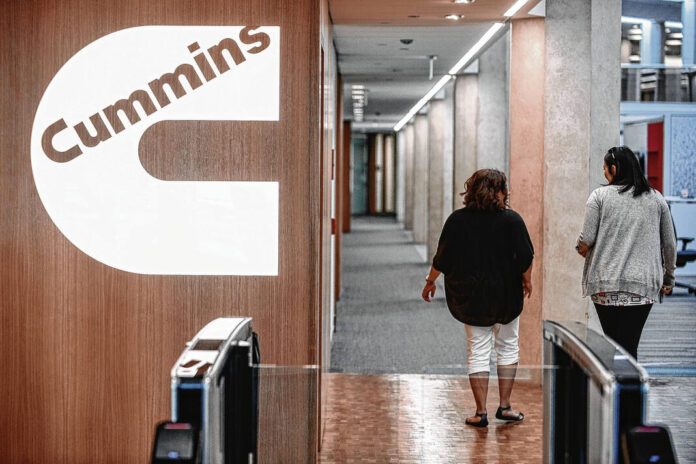